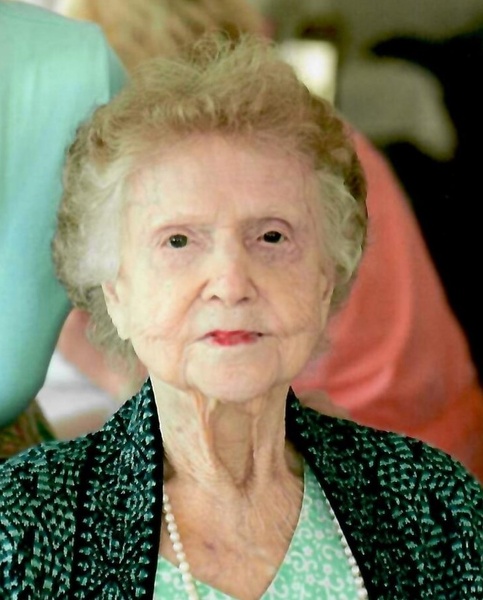 Helen Hayes Mestayer, 98, of Bay St. Louis, MS passed away Wednesday, March 16, 2022, in Bay St. Louis, MS.
Helen was born on June 17, 1923, in Kosciusko, MS.
She attended Milsaps College during World War II and transferred to Ole Miss, joining Chi Omega Sorority. She graduated with a degree in English. She also earned her master’s degree in Special Education from the University of Southern Mississippi.  She married Richard Frederick Mestayer Jr. and moved to the Bay/Waveland area with their children to start the rest of her journey in the early 50's. She was an educator who loved teaching, playing duplicate bridge, and cooking. She taught at St. Joseph Academy and many of her students remained close, visiting her several times over the years. She taught many years in Hancock County and was the director of Chapter One. Helen was a valuable member of Delta Kappa Gamma, an educational fraternity, and served as president. She was an active member of Christ Episcopal Day School where the children attended and a member of Bay/Waveland Yacht Club.
She was preceded in death by her husband, Richard Frederick Mestayer, Jr. and parents, John Percy Allen, and Nannie Knotts Allen.
She is survived by her three children, Dr. Richard Frederick Mestayer III (Paula), Beth Mestayer Weidlish (Ed), and James Allen Mestayer; five grandchildren, Mallory Mestayer Cawlfield, Richard Russell Mestayer, William Frederick Mestayer, JoAnn Mestayer Ricca, and Lisa Elizabeth Mestayer; eight great-grandchildren who refer to her as "Great".
The family wishes to thank all of those who continued to stay in touch with Helen, as well as the staff of Dunbar Village and Notre Dame Hospice for their wonderful and dedicated care.
Anyone wishing to honor her memory can make a gift to Main St. United Methodist Church: 162 Main Street Bay St. Louis, MS 39520, The Hancock County Library System: 312 US-90, Bay St. Louis, MS 39520, or to the charity of your choice.
Visitation will be held Monday, March 21, 2022, at Main St. Methodist Church in Bay St. Louis from 10:00 a.m. until 12:00 noon with a prayer service at 12:00 noon, followed by a private burial.
Edmond Fahey Funeral Home is honored to serve the family of Helen Mestayer.

To order memorial trees or send flowers to the family in memory of Helen Hayes Mestayer, please visit our flower store.