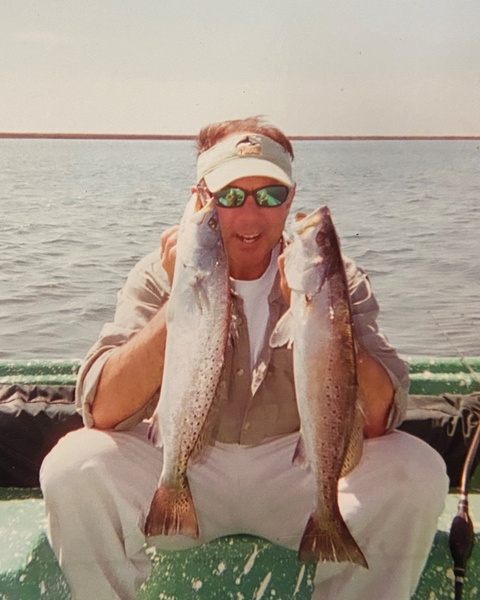 His brothers say he was their mother’s favorite. As the oldest of three boys, they were all a source of pride and joy for her. And when Anthony (Tony) Trapani III passed away at the young age of 58, it was the same day his mother had passed 19 years ago.

Tony was a one-of-a-kind personality. When he was in the room everything changed. He lived life to the fullest always stepping just a little bit over the edge. He worked hard and he played hard, never giving up an opportunity to get out on the Gulf for exploring, fishing and just having fun. While out exploring, he would find treasures of driftwood, hauling back what most would see as a worthless piece of wood. To him, it was a canvas for a treasured work of art. The art he created now hangs splendidly in the main dining room of his home away from home, Trapani’s Eatery.

He and his business partner Jolynne Trapani opened Trapani’s Eatery on the Beach in the Bay in 1994, and they have been serving up the best Coast cuisine and hospitality for nearly three decades facing one disaster after another, determined to keep the restaurant open under all circumstances. After Katrina, they opened a temporary restaurant in March 2006 on Highway 90 and in an unexpected effort to bring a bit of island flair to the Highway, Tony planted a palm tree right at the entrance. It would be years before they could build back on the beach, but through patience and determination to “never leave the Bay” they reopened the Beachfront restaurant in 2012. They would often say, we do what we do for the love of our children, Grace, and Joseph.

A graduate of St Stanislaus in 1982, and from Southeastern Louisiana in 1993 with a communications degree, Tony was happiest when he was in the kitchen. If there was a food competition, he was a sure bet to bring home the first-place trophy. His passion for food as a natural born chef, led him to start the restaurant, now the oldest seafood restaurant on the Coast.

Tony never met a customer he didn’t love often sitting down at their table offering advice on what to order. And his customers came from far and wide to have their fill of Paneed Trout Eatery, Fried Green Tomatoes with Sauteed Crabmeat and Hollandaise, Fried Eggplant with their famous red gravy and best chargrilled oysters on the Coast.  Everyone has a Trapani’s favorite and Tony was right at the center of the dining experience. Even Jimmy Buffet, who lists Trapani’s as one of his top ten favorites, can’t stay away for long.

Tony was a family man. This is where he held his greatest joy, taking his children Grace and Joseph out on the Bay with their friends and his family to teach them the ways of coastal living. Because of his love for wildlife and the water, they say they had the most incredible childhood. He was a true conservationist concerned with protecting the waters of the Gulf and serving as one of the first presidents of the area’s Coastal Conservation Association (CCA). He was an entertainer either through his practical jokes, storytelling or stepping up to take the mic while a local band played at the Blue Marlin Bar upstairs. His personality was bigger than life.

Tony’s love for the Bay is unmatched. An icon of the tourism industry, he left his mark on the heart and soul of all he met and loved, and he put the Bay on the map as a sought-after tourism attraction for the Coast.

Arrangements are being made by Edmond Fahey Funeral Home. In lieu of flowers, the family asks for donations to be made in his memory to the Coastal Conservation Association - Bay Chapter, P. O. Box 3916, Bay St. Louis, MS 39521. Visitation is at Our Lady of the Gulf Catholic Church on Wednesday, September 28th from 10am – 1pm.  The Christian mass will be at 1pm followed by the burial at Gulf Coast Memorial Cemetery on Longfellow Drive. Honoring his memory, Trapani’ s will be closed on Tuesday, September 27th and Wednesday, September 28th.