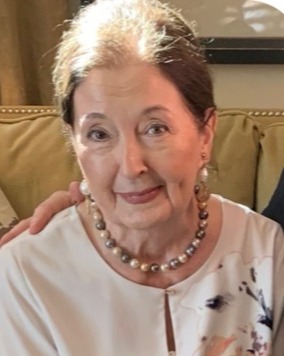 Ann McCoy Rice of Diamondhead, MS; surrounded by her children and loved ones; peacefully joined her heavenly family on Tuesday, November 1, 2022.

Ann was born on October 30, 1933 at Baltzer, MS where she grew up on her family’s farm with her parents Lucy Mae (Duvall) and Lorenzo Dow McCoy and her five siblings Elsie Nora McCoy Hartgraves Bornman; Lorenzo Dow "LD" McCoy, Jr.; Mary Virginia McCoy Bonds; Glenn Edward McCoy; and Dorothy Mae McCoy.
Ann delighted in sharing with her children and grandchildren stories of the wonderful people who helped her parents operate their farm and mercantile and enriched her life beyond measure. After graduating from Drew High School, Ann attended the University of Mississippi where she was a member of Delta Delta Delta sorority. There she met Herbert Lent Rice, Sr. of Webb, MS who had recently completed his Korean War-time service in the U.S. Navy. They were wed on July 24, 1954 in Biloxi, MS. They reared their four children on their farm located outside of Webb, MS. Ann’s love for music was evidenced through her beautiful singing and piano talents.
She was well known for her amazing cooking skills and her delight in hosting dinners for family and friends. Their home was a favorite spot for impromptu pool parties where the children’s friends would inevitably drift to the kitchen and spend hours chatting with “Aunt Ann” and snacking on delicious culinary delights. Ann served as the choir director of the Webb-Sumner United Methodist Church and as an active member of the Sumner Music Club. She was a gifted writer and artist who, after moving to the Mississippi Gulf Coast in 1985, put her artistic gifts combined with her eye for fashion to work as a personal shopper at Gayfers and later Dillards. She continued this love by eventually opening her own boutique, Ann Rice Style, in Pass Christian, MS. Through these venues Ann’s passion and dedication to help women build greater self-confidence through their clothing choices shone brightly. Ann’s foreign travels resulted in her falling in love with the English countryside. Her love for Great Britain and European history began as a young girl after her brother-in-law was killed in action during the Normandy invasion in June 1944. That experience gave birth to Ann’s deep patriotism and appreciation for the men and women who protect this country. On a humorous note, no one dared interrupt her during the PBS airing of “A Capitol Fourth” – the annual patriotic musical tribute to our nation’s Independence Day observance. Ann and Herbert were married for 52 years until his passing on April 15, 2006.

Edmond Fahey Funeral Home is honored to serve the family and friends of Ann McCoy Rice.

To order memorial trees or send flowers to the family in memory of Ann McCoy Rice, please visit our flower store.